Nowadays, most of the electronic products are using touch screens, so do you know what touch screen is?

“Touch panel”, is a kind of contact can receive contacts and other input signals of the induction liquid crystal display device, when the touch of the graphic button on the screen, the screen haptic feedback system can be driven according to the pre-programmed program of various linkage devices, can be used to replace the mechanical button panel, and through the liquid crystal display to create a vivid audio and video effect.

According to the working principle, the touch screen can be divided into four types: resistive, capacitive inductive, infrared and surface acoustic wave;

According to the installation method, it can be divided into plug-in type, built-in type and integral type;

What is a resistive touch screen?

It is a sensor that converts the physical position of a touch point (X, Y) in a rectangular area into a voltage representing X and Y coordinates. Many LCD modules use resistive touch screens that can generate screen bias voltages with four, five, seven, or eight wires while reading back the voltage from the touch point.

– It is most widely accepted.

– It carries a lower price tag than its capacitive touchscreen counterpart.

– It can react to multiple types of touch.

– It is less sensitive to touch than a capacitive touchscreen. 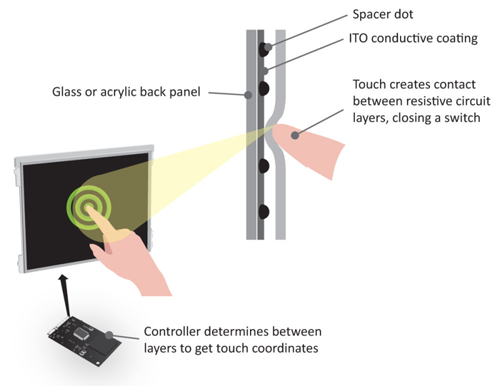 What is a capacitive touch screen?

Capacitive touch screen is a four-layer composite glass screen, the inner surface and the sandwich layer of the glass screen are coated with a layer of ITO, the outermost layer is a thin layer of silicon glass protection layer, the sandwich ITO coating as a working surface, four corners lead out of the four electrodes, the inner LAYER ITO is shielded to ensure a good working environment. When the finger touches the metal layer, due to the human body electric field, the user and the touch screen surface form a coupling capacitor, for high-frequency currents, the capacitor is a direct conductor, so the finger sucks a small current from the contact point. This current flows out of the electrodes on the four corners of the touch screen, and the current flowing through these four electrodes is proportional to the distance from the finger to the four corners, and the controller obtains the position of the touch point by accurately calculating the proportion of these four currents.

– It is most widely accepted.

– It carries a lower price tag than its capacitive touchscreen counterpart.

–  It can react to multiple types of touch.

– It is less sensitive to touch than a capacitive touchscreen. 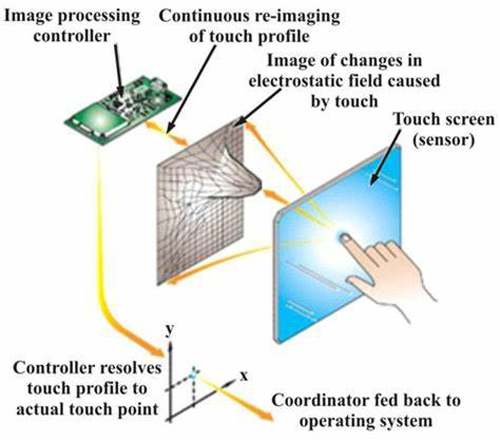 Capacitive and resistive touchscreens both have strong positive advantages. Really, their use depends on business’ environment and the way in which you plan on using your touchscreen devices. Using the information we’ve provided, you’ll better understand these advantages and you will be certain to make the right choice for your unique business.

Saida Glass offers a wide range of display cover glass with anti-glare and anti-reflective and anti-fingerprint for indoor or outdoor electrical devices.

Send your message to us: